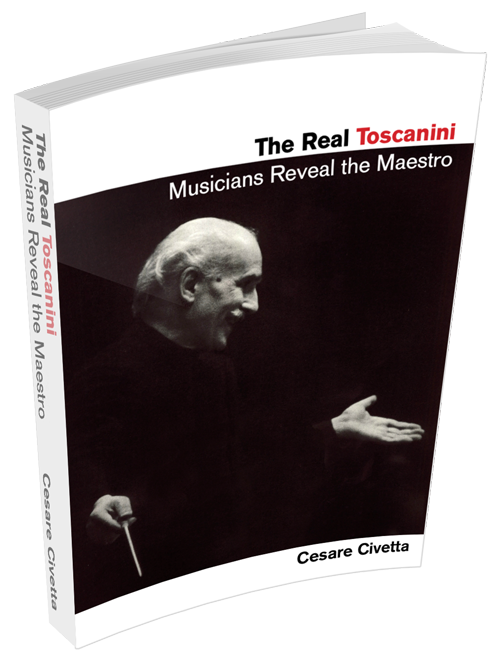 Lauded by Verdi, Debussy, and other music legends, the celebrated conductor Arturo Toscanini raised the standards of orchestral and operatic performance over an astonishing 69 years on the podium. But as he did so, he acquired a reputation as something of a tyrant who unleashed an explosive temper at musicians if rehearsals did not meet his expectations.
In The Real Toscanini: Musicians Reveal the Maestro (Amadeus Press), Cesare Civetta presents an intriguing collection of vivid interviews with 50 artists, including composers, conductors, singers, and instrumentalists who worked with Toscanini. These conversations, together with other firsthand recollections, clarify Toscanini’s philosophy, musical style, and techniques.
Overall, The Real Toscanini depicts a man tormented by inner demons of anger and depression, which were easily triggered by his frustration at being unable to produce the musical ideal in his mind’s ear. He is also revealed as a vehement anti-Fascist and an unequivocal opponent of totalitarianism and racism—he defied Mussolini and publically opposed Hitler. The book includes a comprehensive account of his 1936 inauguration of what is now known as the Israel Philharmonic, in solidarity with Jewish refugee musicians.
Toscanini comes through in this book as a tortured but deeply humane individual who strove to constantly improve—a sincere and humble musician who was nevertheless the pre-eminent maestro of the 20th century.
Purchase the Book!
Available in paperback and eBook for Amazon Kindle and Nook Book
Buy on Amazon

"A riveting account of a life of a musical giant... Civetta offers a most thorough, poignant and inspirational piece, weaving a most intriguing story depicting the life of the legendary maestro."
— Aaron Dworkin,
Sphinx Organization,
founder

Cesare Civetta has conducted over 60 orchestras in 15 countries with sold-out performances at Lincoln Center and Madison Square Garden. His concerts have been broadcast on ABC, CBS, NBC, National Public Radio, Swedish Radio, Voice of America, and the South African Broadcasting Company.
Civetta is the producer of The Toscanini Legacy radio series for which he interviewed fifty artists who worked with Toscanini. His book, The Real Toscanini: Musicians Reveal the Maestro is based on these interviews.
Civetta lives in New York City, where he is the founder and conductor of the Beethoven Festival Orchestra.
What People Are Saying...
© 2022 Cesare Civetta. All Rights Reserved.